Earlier this summer I sat down in an auditorium here in town to watch my daughter dance in her last recital of the season.

There are four dance companies in the studio where my daughter dances and each did several numbers over the course of the four-act show.

One thing you realize when you watch a dance showcase  (or a Broadway musical for that matter) is how challenging it is to be a creative choreographer. It's difficult not to fall into designing multiple variations of the same steps, movements and accents over the course of numerous dances, but that was largely avoided in this show. A couple of times during the routines in which more than one company was involved, the number of dancers on the stage risked becoming a detriment to the clarity of the choreography, but most of the time that challenge was managed smoothly.

The challenge of dance is to hit a perfect blend of choreography, music and movement that allows an emotion to be conveyed. For this to happen, however, the music has to be good, the choreography has to be good and most of all it has to be danced gracefully or at least effectively.

Graceful movement in dance is the equivalent of lyrical playing of an instrument or, in painting, the surety of brush stroke and line. Moving gracefully is like speaking eloquently; it's something not often done these days and you don't realize what it entails until you experience it. And while not everyone can do it, many of these dancers could. The costumes, always part of the visual impact of dance, were nicely done. Also, most of the dancers did a good job with the often tricky task of holding that final pose until the lights go completely black.

Overall, a recital like this is one of the best ways to see what really makes dancing an art form, and what separates it from other actions of motion like gymnastics and cheerleading and whatnot - things that are often associated with or even equated to dance.

Last fall, the National Endowment of the Arts reported that in 2017 just 3.1 % of adults - about 7.6 million - attended a ballet performance in the previous year. 6.3 % - or about 15.2 million - attended a dance performance other than ballet. Both of those numbers were actually up a slight bit from percentages reported in 2008 and then again in 2012. But the only art form on the survey less attended than ballet was opera.

So bravo to the Expressions Dance Company, which is not only doing an exemplary job of teaching dance, but also exposing new generations of young people - and a fair number of grownups as well - to traditions of art that are well-worth knowing, experiencing and most of all participating in. 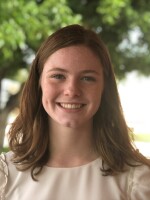 Audrey Pick
Audrey Pick joined KWBU in May 2019 as an operations intern for the summer. Currently, she is a senior at Midway High School and intends to graduate in the STEM endorsement. When not at the station, she is volunteering at Caritas, playing tennis or traveling.
See stories by Audrey Pick