An Artist who helped American painting get past the dominant style of her day get her story told in a new book.

Last week I mentioned a new biography of artist Helen Frankenthaler entitled Fierce Poise that I’m really looking forward to reading.  Maybe this summer.  Her career was a remarkable one, and her influence on American art very significant.

In 1952 she painted a breakthrough piece called Mountains and Sea.  Because muted color made up so much of the visual impact of her painting, this new style became known as “color field” painting, one of the successor movements to abstract expressionism.  Morris Louis, who became one of Frankenthaler’s fellow “color field”

painters, said that she was nothing less than the bridge that led from Jackson Pollock to all that came later.

Critic Hilton Kramer, who, for my money, could explain the significance of modern painters better and more clearly than just about anyone, said that what Frankenthaler did was to eliminate the “bravura rhetoric” of abstract expressionism—think overblown individualistic heroism duking it out with whatever demons were close at hand—“while maintaining its sense of physical immediacy.”  Kramer was one of the few critics who didn't get all caught up in Frankenthaler's technique as being the most singular element within her work.  The real interest of her painting lay elsewhere, he said, “in the quality of its expression rather than the technical means by which that expression is realized.”

In 1966 Metropolitan Museum of Art curator Henry Geldzahler chose Frankenthaler to be one of four American representatives to the Venice Biennale that year.  A landmark exhibition of Frankenthaler’s work opened three years later and established her in Kramer’s eyes as “one of our best painters.”

She believed that artists should recognize no limitations on what they did artistically.  She once said that in art “the only rule is that there are no rules.  Anything is possible...it’s all about risks, deliberate risks.”  Now, that is certainly not a way to live a life. Normal life doesn’t work like that. But, that is how she thought of art, and within the realm of art that’s actually a pretty good quotation to illustrate how creativity comes about.

The dilemma that faced Helen Frankenthaler in 1952 as she stared down at a blank unprimed canvas still faces thoughtful artists today, because good art has always been a difficult fusion of tradition and experiment. When expression carries too much in either direction, the result can fall short. But when an artist can walk that line, her work can become timeless.

Helen Frankenthaler died ten years ago when she was 83.  I hope this new biography can bring her name and her work before a whole new audience. 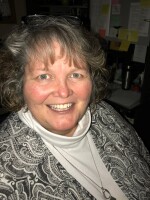