I-35 Construction Project in Waco To Start Sunday

When TxDOT starts construction on I-35, motorists can expect to experience some traffic. But for the next five years, drivers going through Waco on I-35 can also expect a 24/7 work schedule, lane closures and noise. The Texas Department of Transportation’s Waco district held a public meeting this month to share information on the project.

“We don’t want anyone to be surprised,” Roberts said. “We want as much information out there as possible. And we want to give the community and the traveling public the opportunity through a number of venues to be able to communicate with us so we can have two-way communication.”

Ken Roberts is the Public Communications Officer for TxDOT’s Waco District. Roberts said some major concerns for the construction is traffic during lane closures, but the work is necessary. One of the major changes is the permanent removal of the pedestrian bridge over the highway at 8th street.

“The section of Intersection-35 through Waco that we are going to be reconstructing was built in the 60s,” Roberts said. “So, the roadway itself is deteriorating significantly. We work very hard to maintain it, but it’s to the point right now where it has to be replaced. That’s what we are going to do.”

“We have to be able to accommodate for that growth and the subsequent traffic that comes along with it," Roberts said. "We have to address the safety when you have that kind of increase in traffic.”

From 2012 to 2017, there have been 2,284 crashes along I-35 in Waco. Drivers are urged to slow down for fellow motorists and workers during the construction. East Waco resident Francis White is looking forward to the improvements along the highway.

“I travel a lot...I have children out of town so I’m really looking at improvement on I-35, the expansion," White said. "There are so many accidents there - most of the time, I will take a side road if I really need to get where I am going.”

With three children living outside of Waco, White is driving down I-35 about three times a month. She came to the public meeting because she wanted to know when and where the construction will begin.

“As Waco is upgrading, improving and expanding, you really need to be aware of what is going on in your community and in your city,” White said.

When the project is complete, drivers can expect the highway to widen to four lanes in each direction as well as improvement to bicycle and pedestrian areas.

To stay updated on the construction, you can visit www.my35.org/Waco for more information about the project. 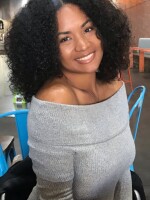 Kristina Valdez
Kristina Valdez joined the KWBU staff in January 2019 as a reporting intern. Kristina is a junior journalism major from Dallas, Texas. 2019 is a big year for Kristina: she will be studying abroad in London during the summer and graduating a semester early in December. Kristina is excited for a career in journalism, telling thoughtful and rich stories.
See stories by Kristina Valdez