CO2 and the History of Weighing Smoke

Officials from countries around the word have met for the last two weeks in Lima, Peru to talk global climate change.   At the heart of those talks is how to limit billions of tons of CO2 that are pumped into the atmosphere every year from coal burning power plants.

But how do we keep track of the CO2 we’re releasing? And just how do we weigh something that floats in the first place?

It turns out there is a venerable history to the science of weighing smoke.

In 16th century England Queen Elizabeth made a bet over the weight of smoke with famed explorer Sir Walter Raleigh. Raleigh is known for popularizing tobacco at the royal court. One day, so the story goes, he told the queen he could weigh the smoke that came from his pipe.

Here's how he did it.  Raleigh took a pinch of tobacco from his pouch. He weighed it, smoked it, and then carefully weighed the ashes.

It's a fine story, even if Raleigh was not exactly correct.

The first thing to remember when measuring the emissions from a pipe, or a smoke stack, is that most of those emissions are invisible. The "smoke" we can see (and associate with air pollution) is the particulate matter that results from combustion. 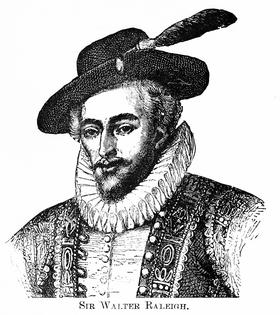 It's important, but it's not the whole story.

CO2 gas, the substance that's a chief culprit in climate change, is invisible to our eyes.

“If we could see it it would be… super red," says Susan Hovorka, a research scientists who works with CO2 at the University of Texas, Bureau of Economic Geology. "It’s infrared. It’s some incredibly more than red color. And you could drive around and see it coming out of every combustion source.”

That’s not to say you haven’t seen CO2 in other forms.  Dry ice is frozen CO2, and you may have liquid CO2 in your kitchen. It’s in those cartridges used for making sparkling water. Both of these things are "byproducts of various refining industries," says Hovorka.

It may be strange to think of the bubbles in your Topo Chico as a food-grade petrochemical byproduct, but they are.

But how are CO2 emissions formed? Well, most things we burn contain carbon, whether it’s coal for power or tobacco in a pipe.  Burning that stuff takes every molecule of carbon and adds oxygen.  Add the C from the carbon and the O2 from the oxygen – with some covalent bonding – and you get CO2.

So, if you know the amount of fuel you're burning and its carbon content, you can add the weight of the oxygen, and you have a sense of how much CO2 you’ve created.

"Gas is just molecules that are far apart,” says Gary Rochelle, a professor of Chemical Engineering at UT-Austin. "Although you can’t really weigh a molecule you know it has a mass of 44 atomic units.”

If you gather enough of those together you have what scientists call a mole of carbon dioxide. That weighs about 44 grams.

"And when you get enough moles together then you’ve got a ton," says Rochelle. "A typical coal power plant might have 4 million tons per year.”

Here’s where Sir Walter Raleigh's method runs into some trouble. It turns out the weight of the CO2 emissions created by burning that coal is actually heavier than the weight of the coal itself.  That's because, by burning the carbon you’ve added the oxygen.  So even though the CO2 you've created is less dense, and it floats, it’s actually heavier.

One ton of some types of coal creates around three tons of CO2.

That's bad news for Sir Walter Raleigh. It turns out the smoke from his pipe was heavier than he believed.

It's even worse news for us. Humans are on track to pump around 40 billion tons of CO2 into the atmosphere this year.

Listen
Listening...
/
An mp3 version of this story.