In a post-election press conference, the newly elected Republican Governor, Greg Abbott, said it was time to put the election behind and begin the process of getting back to work, that work ranged from border issues, Ebola preparedness and the effectiveness of Gov. Perry’s Texas Enterprise Fund.

Governor-elect Abbott said he spoke with newly elected Lt. Gov. Dan Patrick about how to go about securing the border, providing some tax-relief for small businesses and improving public education. He will sit down to discuss the same issues with incumbent Speaker of the House, Joe Strauss, to make sure all three are on the same page ahead of the 2015 legislative session.

“…To bring me up to date on the Ebola issue and find out what needs to be done to effectively meet that challenge,” said Abbott. 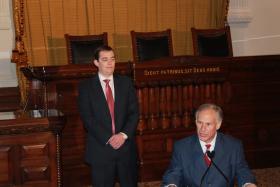 Abbott has already begun the process of moving into the Governor’s Office, setting up a transition team and announcing that his first in command at the Attorney General’s office, Daniel Hodge, will head up this effort.

To ensure businesses continue to thrive in Texas, Abbott said that, as governor, he would focus on building the state’s funding mechanism beyond Proposition 1, a transportation funding ballot item that passed this election.

But another item on the table for the Abbott administration is what to do about his predecessor’s business incentive program, the Texas Enterprise Fund.

“I think there are certain ways in which the Enterprise Fund has been shown to be defective.", Abbott said.

But he’s not planning on giving up on incentive programs, and said he would be in favor of creating an alternative to the Enterprise Fund if the legislature was able to prove its ineffectiveness when it came to creating jobs in Texas.