Stanley Rabke’s family has lived and worked on their Hill Country ranch since 1889. Generations of Rabkes have struggled with the extremes of Texas weather, but one storm sticks out in Stanley’s memory: it came after the drought of the 1950s.

The disaster underscores an irony of life in Texas. “You hope and pray that you’re going to get a good rain, [but] on the other side of it, you hope you don’t get a flood,” says Rabke.

A quick walk from where the turkeys met their fate, some new technology that will help manage that risk is being installed — soil monitoring sensors in the ground.

Dr. Todd Caldwell and his team have dug a pit and they’re connecting wires and setting up a tripod monitoring station, but they’ve run into some trouble.

“You see the sensors have about a 15 centimeter-long tine that’s thin metal, and we have to push those into the clay when it’s dry. This is kind of set up like a concert,” Caldwell  says. “So, we have to push really hard to get them in, so we’re struggling a bit right now…”

The tines measure the how much water is in the soil. That information travels on buried wires to the tripod. It gathers more data. then it feeds it on a cellular network back to the landowner, and then to the University of Texas. That’s where Caldwell works, at UT’s Bureau of Economic Geology.

Why does soil moisture matter? Think back to those turkeys. The floods that washed them away came after years of drought, when the ground was, in Caldwell’s words, “set up like concrete.”

It seems counter-intuitive, but it’s common for floods to occur in Texas not only when the earth is over-saturated, but when also when it’s too dry. So monitors help predict flooding.

That’s not all. They also tell farmers when to irrigate and reveal how water seeps through the soil to refill aquifers. Monitors can help the state predict how Texas reservoirs will refill after a rainfall.  Will that runoff go to the reservoir, or get sucked up into the ground?

“That means the folks at LCRA and in the Highland Lakes system, they can make decisions on how much water to release by having that information,” says Michael Young, also with the Bureau of Economic Geology. “It would be the same for first responders for flood prediction: by knowing what the soil moisture is, we can do a better job of predicting floods.”

The monitors will be used to reveal more about global weather patterns as well.

“We’re kind of under the gun right now, trying to get this all knocked out in time for the satellite launch,” Caldwell says.

The satellite he’s talking about is part of NASA’s Soil Moisture Active Passive Project. It will measure the earth’s soil moisture globally every three days.

The satellite will carry two devices to do that: one to measure heat from the earth’s surface and the other a radar sensor. The information they gather will estimate soil moisture levels globally. But it needs to be validated by local sensors on the ground. That’s where monitors like the one on the Rabke ranch come in. 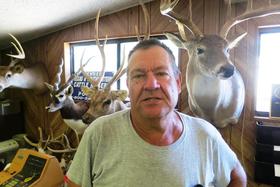 “These local measurements are very important. We may not be able to resolve many issues using satellite data,” says Nerendra Das, a scientist at NASA’s Jet Propulsion Lab who is working on the project.

With all the data points put together, NASA hopes to improve weather forecasting, better predict drought and reveal more about how the sun’s energy hits the ground to make weather happen in the first place.

It’s a big, ambitious, project. But that doesn’t make it an easy sell.

“It’s been a struggle, let’s just say,” says Caldwell. “That’s why we hopscotch between property owners that are available that day, or even willing to talk to us.”

Back at the ranch, Todd Caldwell says he’s having trouble finding landowners to let him set up his monitoring stations. Distrust of government has been around for a long time in Texas.

“It is suspicion that the government is watching them,” Caldwell says. “And satellites are watching us there’s no joke about that.”

It’s just, in this case, he says all they want to watch, is the soil moisture.