This week has been a dizzying one for people working to understand and combat global warming.

Tweets on climate change from the account of the Badlands National Park were deleted. Plans to scrub climate information from Environmental Protection Agency websites were walked back by the Trump administration. Then, news broke that the budget for the EPA may be cut by $1 billion dollars.

Some of those reports may not be born out, but the furious pace of the news has researchers in Texas wondering about the future of the collection and availability of climate data.

In a way, it’s nothing new.

Bill Fisher has taught earth sciences at UT, Austin for 57 years, so he’s seen a lot of shifts in federal research funding depending on who’s in the oval office.

“Everyone that’s interested in doing research would like to have it consistent,” he says. “But that’s probably unrealistic. Priorities come and go, there are some things that are not funded much now because it’s not as critical as it was 40 years ago.” 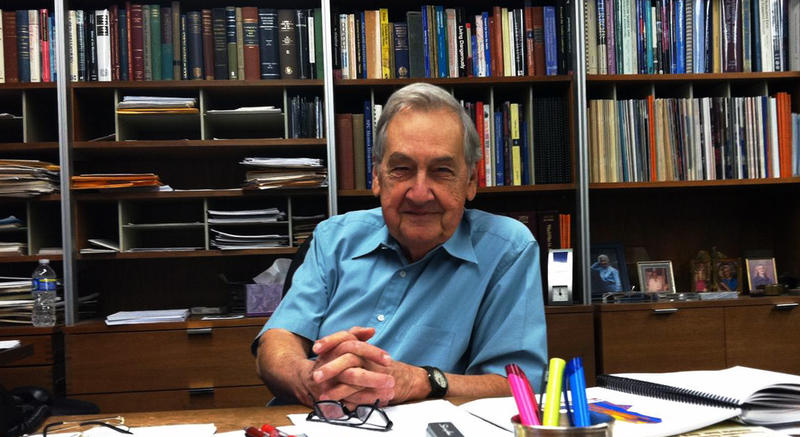 But, when it comes to climate change, Fisher, who is not a climatologist, thinks it makes sense to keep up research.

Nonetheless, given indications from the Trump administration, many expect cuts to climate research funding.

At a meeting of the American Metrological Association this week, a NASA official had to assure people that his agency hadn’t been contacted by the administration about cuts yet.

Texas State Climatologist John Neilsen-Gammon was at that conference. He says there are concern is that even a temporary suspension of funding for NASA could have long-term impacts.

“The thing you absolutely need for climate change research is continuity of observation,” he says. “If you suddenly break off that endeavor, not only does it mean you’re missing future observations but the observations you’ve already collected suddenly become less valuable. It would be a terrible loss.”

Beyond cuts to research, people are also worried about the availability of data.

The news that EPA climate web pages may be removed provoked a lot of outcry. But many scientists use more obscure government websites that fewer people even know about.

“I relied on their data to know that October and November combined in Texas averaged between five and six degrees above normal,” he says. “Which is why the leaves were so late to drop this year.”

Neilsen-Gammon says people in Texas care about what just happened or what’s going to happen. He says that includes those who don’t share the scientific consensus about manmade climate change.

Fisher, for example, is skeptical of much of the accepted science about global warming.

“I don’t share the view that the science is settled. I think there’s a lot of issues out there that we need to understand in a much much better way,” he says. “Climate sensitivity is certainly at the forefront of that.”

Still, that may be a good reason to fund the research.

“Research in that area is worthwhile to be sure,” he says, “Anything that even remotely has some of the consequences that some people think [global warming] might have is obviously worth exploration. I don’t think any sensible person would argue that."