For Cathy McMullen, the reasons to ban fracking in Denton are as obvious at the drilling rig that sits on the corner of Masch Branch and Hampton Road on the northwest side of town. It’s big, it’s noisy, and she believes it vents toxic emissions into the community. The site is, however, not very close to any houses.

“I’ll show you where this exact same thing was sitting by someone’s home,” she says.

We drive south until we reach a subdivision. Some of the homes here have been around for a while. Rows of “Sold” signs in front of houses under construction attest to the neighborhood’s popularity. We park at the end of a dead end road, where a natural gas well sits on a field adjoining the subdivision. The large equipment is gone, but McMullen says that could be temporary.

“At any time they can come back and frack this well,” says McMullen. “These people could all be here. They will just see all the trucks coming into this area. And when they wake up two or three or four days later, there is just going to be a big huge site sitting right here, and there will be nothing they can do about it.” 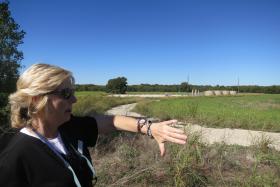 If the fracking ban was in place, “they could not frack this well,” says McMullen. ”That is the argument.”

Of course, there is another side to that argument. In the lead-up to election day, both sides have rallied their troops over a proposal to ban fracking in the town of Denton. Money has poured in from the oil and gas industry to defeat the proposal. Environmental groups have come to support it. People here seem certain that the vote in this North Texas community could have consequences for the entire state of Texas.

While Denton might very well become a “test case” for other Texas towns that want to abolish the fracking, there are parts of this story that are specific to this town alone. Both supporters and opponents of the ban say the conflict goes back to how loose regulations were during the early days of the North Texas gas boom. That’s when fracking, a method of pumping water and chemicals deep underground to free up oil and gas trapped in shale formations, ushered in a new era of drilling.

Back then the City of Denton permitted tracts of land for drilling that sat near residential areas. In other parts of town development grew around the wells. The city has since created new set-back rules and other regulations to try to distance residents from the heavy industry of gas extraction. But ban proponents say those original tracts are grandfathered in. The only way to keep drilling and gas extraction at a distance in large swaths is to ban fracking completely from here on out.

The fact that mineral rights and surface rights are often owned by different people further complicates matters. Frack Free Denton, the group pushing for the ban, is careful to say they are not advocating a ban on drilling itself, and that mineral rights owners would be allowed to drill for gas. But in practice removing the option of fracking makes it hard to believe any drilling would take place.

“In essence, they’re gonna shut your wells down,” says Bobby Jones. Jones is a local mineral rights owner and co-chair of Denton Taxpayers For a Strong Economy, the group opposed to the ban. “Whenever the wells need to be re-fracked, if you can’t re-frack them, that’s when you’re going to have lawsuits come in for condemnation,” he says. “Because there’s still gas down there to develop.”

Both sides debate the economic impacts of fracking. Taxpayers for a Strong Economy says the ban would cost the area millions in tax receipts. Frack Free Denton cites loss of residential property values, drilling’s cost to city infrastructure, and threats to public health.

For Jones and other mineral rights owners, the ban would have a more direct monetary impact.

“It could help some grand kids go to college. It could help a lot of things and they are potentially taking it away from us,” he says.

Voters are weighing those costs, the pricetag of seemingly inevitable lawsuits against impacts of the drilling boom that are both global and local. For every person who supports the ban over concerns about fossil fuels and global warming, there are others who simply want to rid Denton of what they perceive to be a serious nuisance, even a danger. In this part of Texas, accidents do happen. And drillers have paid large settlements and court judgments to families who have gotten sick.

If the ban passes, some state Republican officials have already said the City of Denton could be sued. State legislators have suggested making fracking bans against the law, and Texas oil and gas regulators have even suggested that Russia may be secretly supporting the ban. (Advocates for the ban now jokingly declare they are not secret agents when they make public appearances.)

But for all the rhetoric, it would be a mistake to view the vote in Denton in a strictly partisan light.

At a recent meeting of the Denton Republican Women’s Club at El Guapo’s Mexican restaurant, supporters and opponents debated the ban. The County GOP is officially against it. But some in the audience were not, and others, like Debbie Terry, were undecided.

“I am a Newt Gingrich, “Drill, Baby, Drill” kind of person,” said Terry, a longtime conservative activist who seemed to echo the feelings of some others in crowd. ”I’m very pro-drilling. Unfortunately, and it sounds very self-serving, I don’t want it in my back yard.”

Listen
Listening...
/
An mp3 version of this story.