How will your loved ones remember you after you're gone? Carl Dudley of Decatur, Ga., wants to leave a legacy, but deep insecurities get in the way after COVID-19 leaves him disabled and dependent on family for survival. The 68-year-old man must confront his past to create a hopeful future. Carl Dudley is the grandfather of NPR's Andrew Craig, who has the story.

ANDREW CRAIG, BYLINE: Pearls of sweat glint with sunrise. Papa Carl wipes them from his forehead, breathing heavily, though his work is just beginning. His backyard sits on a hill freckled with white clovers.

CARL DUDLEY: They're weeds, so I'm getting rid of them. Watch out.

CRAIG: There are three rules to follow around Papa Carl. One - stay out of his way.

Oh, my gosh. You're going to spray my shoe.

DUDLEY: Then you're going to have to disinfect it.

CRAIG: Two - no to heights. He's acrophobic. Three - family first. It's why he has this home in Decatur, Ga.

DUDLEY: As a Black person in America, I'm putting this all together for them to get a leg up in society. I usually sit after about 10 minutes. I don't have the stamina that I used to have. I don't know if it's age or COVID.

CRAIG: Hello, Aunt Mattie. How are you?

CRAIG: My Great-Aunt Mattie and I talk all the time. We love trading travel stories. But in March of 2020, we called 911 together to send an ambulance for Papa Carl.

MATTIE: He sounded horrible, like he was dying. He couldn't get rid of the fever. He had no energy. Chest pains - he had everything.

We did an end-of-life call with his son and his friend, Darryl.

DARRYL ROBINSON: I do remember saying that he was my rock, that we had been in each other's lives for 18 years and that I don't want us to spend another moment apart.

ROBINSON: My desire was that he would walk out of the hospital so that we could actually be recognized as a couple and not have to live kind of like in hiding.

CRAIG: Even though Papa Carl was sedated, Aunt Mattie thinks he heard the call with everyone on it. Slowly, his condition stabilized and he came off the ventilator. After spending four months in the hospital, Papa Carl was wheeled out in July 2020.

MATTIE: He couldn't walk. The stairs were dangerous at that point.

CRAIG: Papa Carl's home has steps, but Darryl's house is flat with hardwood floors - perfect for a wheelchair. So that's where he went. Family followed.

MATTIE: We came from Denver, and we were all there for a month to take care of him.

CRAIG: Meaning that the people Papa Karl had kept apart for so long - our family and Darryl - were now housemates.

CRAIG: After seeing Papa Carl nearly die, Darryl wanted to show him how much he loved him. But the smallest touch or hug from Darryl would make Papa Carl stiffen, especially if Aunt Mattie was in the room.

MATTIE: The only time I have encounters with him being gay is when he's with his partner, and his partner will hug him or kiss him or something like that. Sometimes I wish he wouldn't do it, but it doesn't bother me.

CRAIG: Nurses were in and out, visiting Papa Carl. So were physical therapists.

UNIDENTIFIED PHYSICAL THERAPIST: It's a little bit weaker pushing your heel up, right?

UNIDENTIFIED PHYSICAL THERAPIST: You got it. Good. All right, have a seat. Excellent job today.

CRAIG: Papa Carl was getting stronger, moving around more. But Darryl was feeling confined.

ROBINSON: Carl needs to decide on, where does he see me fitting in his world?

DUDLEY: A uncloseted gay male - that's just not me. And that part of me doesn't have to change.

CRAIG: Darryl usually kept his distance, and it only seemed to grow as the days passed.

ROBINSON: I love him deeply, but maybe we just go our separate ways.

CRAIG: Late one night, after the others were asleep, I tiptoed to Papa Carl's room to ask him about the root of this tension between him and Darryl.

DUDLEY: I had seven sisters growing up. I was the only boy. So there was always the question about being a sissy.

DUDLEY: Once my father left, my mother started treating me like I was the man of the house. I remember her always telling me, men do this and men do that. Like, I had to mop the floors.

CRAIG: Carl and his family lived on the East Side.

DUDLEY: I remember the guy who dressed like a girl. His male name was Ralph. He would strut down the street, going to school. And my mother saw Ralph daily. She would shake her head - that punk. He's going to have a hard time in life. I knew I was probably like Ralph, but I always brought home girlfriends.

CRAIG: In 1971, Carl had a blind date to senior prom - my grandma. Two years later, they were married, in college and had a baby - my dad. Carl's mom was thrilled. She didn't know the truth.

DUDLEY: I met this guy in the club. I went home with him.

DUDLEY: I liked being with a man, and I liked the sex. And I had told my wife that I was gay.

CRAIG: Carl's mom was shattered when she found out. His sisters Mattie, Wanda, and Gwen remember.

MATTIE: My mom was crying and just saying, why? Why?

WANDA: The only boy that she had turned out to be gay.

MATTIE: That was devastating.

WANDA: He was married, and that was damaged.

MATTIE: My mother and my father and my sister went and picked Carl up on his way home from work.

GWEN: It was like when one was in pain, everybody was in pain. Everybody - it's the way we were brought up.

CRAIG: After that, Carl left Denver - first to Houston, and then to California, where he met Darryl. Carl returned to Denver often, though, to visit his son and his mom. He took Darryl once.

ROBINSON: I wasn't introduced as his partner or anything by any means. It's almost as though I would be just a friend.

DUDLEY: She never came fully around. She would get either the pastor or her men friends to talk to me about how my life should be different. I remember my mother was dying. And she expressed that she was not happy with the way that I had lived my life, that I had turned out to be gay. That was not what she had planned for (inaudible).

CRAIG: During his recovery, Papa Carl made trips to his house to check on things.

CRAIG: And in September 2020, he came home for good. With their relationship at an impasse, he and Darryl broke up. My dad and Aunt Mattie stayed at his house to monitor his recovery.

MATTIE: He has had HIV, two strains of cancer. He had COVID. He's walking around and doing well. He's Godsent.

CRAIG: Or, as people in my family joke, a cat with nine lives. Not long after Papa Carl came home, one of his closest friends died without ever coming out of the closet, and that weighed on him.

I was back in Decatur, and we spent the day riding around town.

DUDLEY: A man is confident and sure of himself. It doesn't matter his sexuality.

CRAIG: Papa Carl was in the driver's seat. More than a year had passed since he had returned to his home. I wanted to see what he was thinking about life.

DUDLEY: I don't want to have any regrets now - none. And that doesn't mean that I'm - I have to do anything spectacular just to be able to be comfortable and be happy. Matter of fact, I just went and bought me some nail polish. I've always wanted to polish my nails. But I tried it - didn't like it. So I wasted $5 on a bottle of polish. It was black. It may have been the color.

CRAIG: Papa Carl was about to travel to Denver to be with family. To my surprise, Darryl was going with him.

DUDLEY: We have been in each other's lives for almost 20 years.

ROBINSON: It's not common that you find - especially with Black gay males - that two men can come together and still, you know, be attached. It's a struggle.

DUDLEY: It's always evolving. At this point, it is what it is. We love one another. I think that we need to just be who we are.

ROBINSON: I'm going to always be a part of his life, basically.

UNIDENTIFIED PERSON: It takes about two minutes to get to the top.

CRAIG: Remember, rule No. 2 - no to heights? Papa Carl broke it.

CRAIG: We're in a cable car, climbing up Stone Mountain.

UNIDENTIFIED PERSON: You guys have a great rest of your day.

CRAIG: From the top, you can see Atlanta's skyline winking from afar, enticing reflection. As a Black man, Papa Carl wants to leave a legacy of wealth for our family. But he's already forged one more sacred and essential to generational uplift - the legacy of simply being himself, an individual. I will carry this legacy into the future through being the person that I am - a Black, gay man, a journalist. I am the pride of my ancestors. In the words of Dr. Martin Luther King Jr., let freedom ring from Stone Mountain of Georgia. 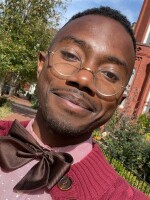 Andrew Craig
Andrew Craig is a journalist from Denver, Colorado. He loves to learn about the world, and tell stories that raise critical questions and inspire empathy. A graduate of Yale University (BA '14) and The University of Texas at Austin (MA '18), he began working for NPR in 2019. His hobbies include reading, people watching, and exploring new places.