This week on Conversations With Creative Waco, host Rae Jefferson interviews three legendary artists who are painting murals in Waco this Summer.

Ira Watkins and Chesley Smith have partnered to design a 300-foot mural in South Waco chronicling a significant portion of the city's history, beginning with the infamous 1953 Waco tornado. The mural is at Diversified Product Development on Webster Avenue and was organized by local nonprofit Waco Cultural Arts.

New-Orleans based artist Richard C. Thomas is in Waco for the summer working with a group of high school students for the ArtPrenticeship program. They are painting a mural on the side of Brotherwell Brewing in East Waco.

The finished mural will be unveiled at the ArtPrenticeship Mural Wrap Party at 6 pm on August 3 at Brotherwell Brewery.

Catch the next Conversations with Creative Waco on Friday, August 23rd. 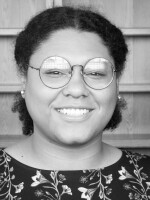 Rae Jefferson
Rae Jefferson, host of Conversations With Creative Waco, is a creative, Netflix binger, and marketing professional, in that order.
See stories by Rae Jefferson