Editor's note: We are continuing to update this post with reaction and developments in this story.

He's charged with abuse of official capacity (a first-degree felony) and coercion of a public servant (a third-degree felony). The two felony charges are the first against a Texas governor in nearly a century, and carry possible sentences of up to 99 and 10 years respectively.

Since he's been charged with a felony, the governor will be booked and arraigned. The date for that is likely to be set Monday. The charges could lead to a trial. 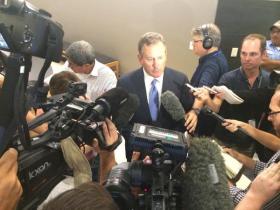 The special prosecutor behind the case, Michael McCrum, said he interviewed over 40 people and reviewed hundreds of documents and dozens of cases to make his case before the Grand Jury. "I looked at the law and I looked at the facts," McCrum said.

Governor Perry's office responded to the charges with a statement that "the veto in question was made in accordance with the veto authority afforded to every governor under the Texas Constitution." They maintain the governor acted within the law and power of his office.

Perry was not interviewed or subpoenaed in the investigation. When asked if Perry refused to voluntarily testify, Special Prosecutor McCrum said he would not comment. You can hear McCrum's full comments here.

Some Democrats are already calling for the governor to step down, among them Rep. Joaquin Castro (D-San Antonio).

Critics argued Perry’s veto threat would also shut down an agency that had just announced it would be investigating allegations of corruption at the Cancer Prevention and Research Institute of Texas (CPRIT). CPRIT was once considered a crown jewel in Perry's tenure as governor.

The complaint against Perry was originally filed by the campaign finance watchdog group Texans for Public Justice. The group's director, Craig McDonald issued a statement saying they are "pleased to see a Travis County grand jury recognized Perry's bullying crossed the line into law breaking.  We belive Governor Perry should consider resignation."

The lawyer that represented Perry during the grand jury process, David Botsford, issued a statement several hours after the indictments were handed up:

I am outraged and appalled that the Grand Jury has taken this action, given the governor's constitutional right and duty to veto funding as he deems appropriate. This clearly represents political abuse of the court system and there is no legal basis in this decision. The facts of this case conclude that the governor's veto was lawful, appropriate and well within the authority of the office of the governor. Today's action, which violates the separation of powers outlined in the Texas Constitution, is nothing more than an effort to weaken the constitutional authority granted to the office of Texas governor, and sets a dangerous precedent by allowing a grand jury to punish the exercise of a lawful and constitutional authority afforded to the Texas governor.

"I'm disappointed with Travis County's attempt to criminalize state politics, in Gov. Perry's case, threatening a veto if a state subdivision did not act responsibly.  As I understand the facts, Governor Perry's acts were consistent with what any House or Senate Finance Chair would do to get the attention of a state agency."

What's Behind the Charges

The veto at the root of the case came as the result of an ultimatum given by Perry to Travis County District Attorney Rosemary Lehmberg.

In April 2013, Lehmberg was arrested for drunk driving. She pleaded guilty and served jail time, but refused to step down. In June of last year, Perry promised that if Lehmberg did not resign he would veto the funding – and he made good on his promise. A grand jury later found Lehmberg not guilty of any criminal wrongdoing.

What About Perry's Presidential Aspirations?

As our political reporting partners at the Texas Tribune note:

The indictment throws a major wrench in Perry's possible presidential ambitions; he was in Iowa last week and was expected in both New Hampshire and South Carolina in coming weeks. Perry is the first Texas governor to be indicted in almost a century.

Perry had been riding high and making national headlines in recent weeks, railing against the Obama administration for a perceived lack of response to the humanitarian crisis on the Texas-Mexico border, then reallocating funds to send National Guard troops there himself.

Voices across the political divide wasted no time in responding to the charges, and the follow an expected path: Democrats are calling for Perry to step down; Republicans are saying the charges are without merit. Here's a sampling: