Jeb Hensarling Will Not Run For House Majority Leader

Congressman Jeb Hensarling of Dallas says he has decided against running to replace Eric Cantor as House majority leader. 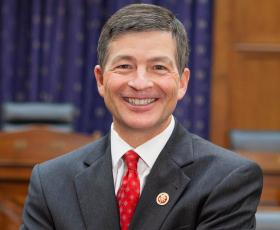 Hensarling announced his decision on Thursday. That leaves two candidates vying for the job of No. 2 House Republican leader: Pete Sessions of Dallas and Kevin McCarthy of California.

The leadership job opened Wednesday when Cantor said he'll step down as majority leader on July 31. Cantor was defeated Tuesday in the Virginia GOP primary by a little-known economics professor who was heavily backed by conservative voters.

House leadership elections will be held next Thursday.

Hensarling says he made his decision after prayerful reflection. He chairs the House Financial Services Committee.

As KERA reported earlier this week, Hensarling's name is on a list of possible successors to U.S. House Speaker John Boehner, who may step down after November's election.

“Although I am humbled by the calls, emails, and conversations from my colleagues  encouraging me to return to leadership for the remainder of the 113th Congress, I will not be a candidate for Majority Leader next week.  After prayerful reflection, I have come to the conclusion that this is not the right office at the right time for me and my family.  I look forward to working with the new Majority Leader to fight for a freer, stronger, more prosperous America as Chairman of the Financial Services Committee and the Representative of the Fifth District of Texas.”