Polls across Texas are now closed in the 2014 Democratic and Republican primary runoff elections. Since the start of early voting May 19, voters have selected six candidates that will run in November's general election.

On the Democratic side, two contests:

This post is no longer being updated. Read below for updates as they came in election night.

Update: After Besting Dewhurst in Primary, Patrick Looks Toward November

Patrick addressed his supporters in Dallas a short time ago. "For everyone watching tonight, if you love America, the Constitution, Texas, free markets, the Second Amendment and the liberty that comes from God, welcome to the grassroots of the Republican party," Patrick said.

"Let me tell you what we're going to do starting this week. We're going to go into Democratic strongholds," Patrick said. "Some Democrats have said they want me to be the nominee. Well, they've got me – and I'm coming."

Democratic Lt. Gov. nominee Leticia Van De Putte released a statement saying she will focus on what she called "smart business decisions" for Texas "regardless of political party."

A 91-year-old Texas Republican – the oldest-ever member of the U.S. House – has been defeated in a primary runoff.

Relatively-unknown Republican primary challenger John Ratcliffe beat U.S. Rep. Ralph Hall in the first runoff Hall ever faced. Ratcliffe had the backing of national conservative groups, while nonagenarian Hall countered with a traditional campaigning style – though he too was endorsed by some top tea party activists.

No Democrat is running, which means Ratcliffe will win in November.

Republican State Board of Education member Pat Hardy has defeated a Tea Party challenger with no educational or school administration experience.

Hardy has spent three decades teaching social studies and has sat on the state board for 12 years. Restaurant manager Eric Mahroum had criticized Hardy for voting with Democrats on some issues, including whether creationism should be taught alongside evolution in public schools.

Incumbent David Dewhurst had been in the Lieutenant Governor's office for a dozen years until he was defeated in the GOP runoff primary tonight. Dewhurst concluded his concession speech just moments ago.

"As a campaign team, I just want to say, I'm glad that against a tsunami of untrue attacks, you stuck with the principle honesty is the best policy," Dewhurst told the crowd.

"Stand tall and keep your head held high," he continued. "You stand tall against the attacks from the other team that were continuing thorough today." Still, Dewhurst pledged to support Dan Patrick in his Lt. Gov. bid against Democratic nominee state Sen. Leticia Van De Putte this fall. "Tomorrow we rise to a new challenge, together," he said. "And that new challenge that we rise to tomorrow is we must unite in order to win in November."

Dewhurst tried two years ago to win the Republican nomination for U.S. Senate, but lost that to Ted Cruz – who like Dan Patrick, has the support of Tea Party voters. 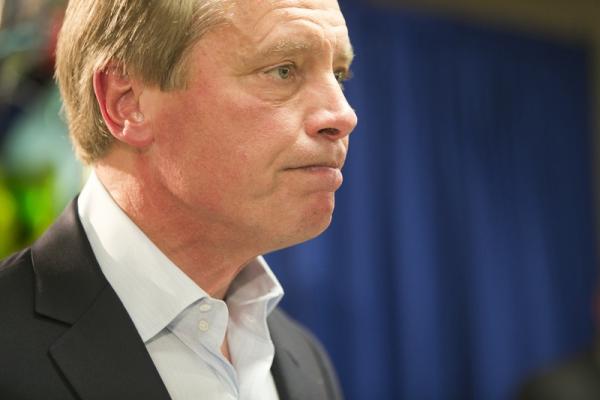 Listen to the interview below:

The Texas Tribune has called the Lieutenant Governor runoff for Dan Patrick.

Runoff voters weren’t as friendly to Kinky Friedman, who is losing to Jim Hogan in early voting. Both candidates are outsiders in the Democratic party, but Hogan – who has declined to fundraise, campaign or state he will appear with fellow Democratic nominees – has increasingly alienated Democratic insiders since his primary night showing. That doesn’t look like it's been any help to Friedman, however – who even lost in Travis County early voting, 44 to 56 percent.

Our reporting partners the Texas Tribune have early voting totals on their website. (It's worth noting polls in El Paso are in a different time zone and not closed yet.)

The only change from primary election night is in the Railroad Commissioner race, where Ryan Sitton, who trailed Wayne Christian, is now up in early voting, 57 to 43 percent.