David and Art - Hope for the Future

During the American Civil War a German painter showed what art could offer to members of Congress, and to us today.

In the late 1850s the political future of the United States was growing increasingly bleak, and people openly wondered if the republic could survive as its sections drifted further apart.  To concerned citizens, the presidential election of 1860 loomed large with the potential of driving circumstances past the point of (more)

reconciliation.  But even as the crisis approached, Congress also attended to other—some might even have said trivial—matters.  In February 1860, the newly-created United States Arts Commission presented a report to President James Buchanan.  It recommended an outlay of just under $167,000 on works of art for the capitol building, then being remodeled and expanded (that translates to over $5 million today).  Realizing the strains the nation was experiencing, the three-member commission reassured the beleaguered president that in times of dissension and disagreement the “arts afford a strong bond of national sympathy.”

Despite the grave situation facing the nation, Congress responded to the commission’s obvious faith in the power of the arts.  National sympathy and unity—especially in the halls of Congress—was sorely needed.  Even as Civil War exploded, the government commissioned a painting that celebrated the inevitable triumph of union and expansion.  The colossal Westward the Course of Empire Takes its Way, the work of German-born painter Emanuel Leutze, was to crown the west stairway in the new House wing of the capitol.  At the apex of the twenty-by-thirty foot painting stands a lone figure on a rocky promontory overlooking the Pacific Ocean raising his hat in joyful celebration.  From a ledge below, a second figure hands up to him an unfurled American flag.  In the foreground, throngs of people, including an African-American, scramble to see San Francisco Bay and the glimmering western ocean beyond, the end of what we know has been an arduous cross-country journey.  Obviously more than just a painting, the work conveyed a powerful and hopeful message.

It took a great faith to commission such a work in the summer of 1861—faith not only in the ultimate future of the union, but faith in the power of art to convey that certainty and reassurance to all the people who would pass beneath it everyday.  But from before the colonies even declared their independence, Americans had seen art as a shaper and transmitter of society’s values.  Accordingly, it was of interest to the government.  The traditional belief that art had the power to be of broad benefit to people and to transmit commonality to the nation found its ultimate expression exactly 100 years after the end of the Civil War through the creation of the National Endowment for the Arts. 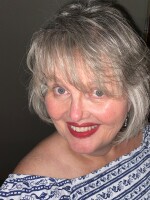 Brodie Bashaw
Brodie has been with KWBU since June 5, 2000. She knows the exact date because it was less than one month before KWBU began broadcasting NPR programming. Her commercial radio experience coupled with many years in public broadcasting, have given her a good foundation for heading up the on-air side of KWBU's operations. Brodie was raised in a military family; her father's Army stations ranged from Minnesota to Germany, Washington, Nebraska and California. But it is TEXAS she calls home! Brodie has two canine companions and loves being the aunt to 5 nieces and 4 nephews. She also enjoys playing dominos and a variety of card and board games. Brodie_Bashaw@Baylor.edu 254-710-3695
See stories by Brodie Bashaw