I'm CJ Jackson and this is the Business Review.

Can an investor, give to a good cause and still make money? Jim Ryan, managing director at Merrill Lynch at the private banking and investment group in New York City says you don't have to sacrifice performance by bringing your values into your portfolio.

There are social impact bonds being offered in the marketplace, often referred to, referred to as pay for success. Securities where a very clearly defined social problem, whether it's asthma in schoolchildren, recidivism among, prison inmates and people can invest money in a bond and the rate of return on that bond is dependent on how fewer children have asthma and how few people wind up back in prison. The payer in these instances is an insurance company might be willing to pay for a rate of return if they can figure out some way to reduce the number of school children with asthma because ultimately the insurance company's paying less claims and the same for the recidivism issue and among prisoners, a state, will have a lower cost if they've got a few people back in prison.

There are more and more issues like this being identified where there is an attempt to eradicate or to deal with a social issue by having a clearly defined set of metrics. Can we reduce, some problem here? And if we can, then our investors will be making money.

The Business Review is a production of KWBU, Livingston McKay and the Hankamer School of Business at Baylor University. 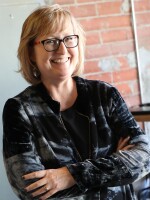 CJ Jackson
C.J. Jackson drives on sunshine and thrives on family, NPR and PBS. She is the assistant dean of communications and marketing at Baylor University’s Hankamer School of Business and host of public radio’s “Business Review.” Previously, she was director of marketing communications for a large, multinational corporation. C.J. has two daughters—Bri in San Antonio and Devon in Chicago—and four grandchildren. She lives with a little yellow cat named for an ancient Hawaiian tripping weapon.
See stories by CJ Jackson